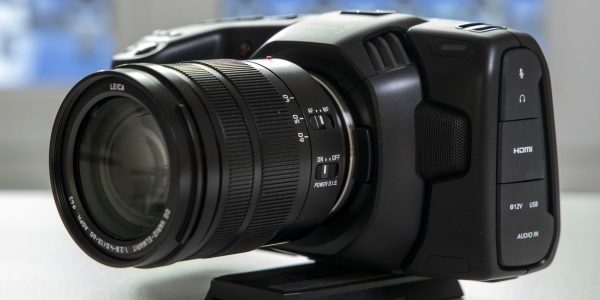 Well our industry is surely aiming for the future, right? We have drones that can take cinematic shots, we can live-stream a whole event and share it around the world and we have Rigs with the help of handy cameras, making any kind of shot possible.

So what’s the deal with BLACK MAGIC POCKET CINEMA CAMERA 4K that it seems so futuristic?

Its the smallest 4k camera that shoots 12 bit 4:2:2 4k Cinema RAW. This is also the 1st camera this size to have XLR input.

The super intuitive menus, the large 5” LCD, its ability to shoot in low light conditions definitely and Da Vinci Resolve as a package makes it a big plus. The down side is poor battery management and challenges of media management.

Yet keeping the flaws aside, what follows next is a classic trope for all Black Magic fans to go on cloud nine:

They record RAW (3:1) and various flavours of ProRes, as opposed to highly compressed proprietary codecs like most other manufacturers. That means 12-bit 422 RAW is recorded internally in a camera, and that is a big deal – especially at this price point!

The feedback Accord Equips has got from the clients, spoke about the media management. Filmmakers were pleased that Black Magic has chosen to give different compression recording option. So if somebody who cannot invest in more media, can use the Compressed 4K version to shoot.

Black Magic Design has some really intuitive menus … they are so straightforward and easy-to-use that you would never have to read those word manuals or anything like that. When you see camera menu like this, you start wondering why all the other (mostly Japanese) camera manufacturers never manage to make straightforward menus where you can actually find stuff more easily.

The BMPCC 4K uses Canon LP-E6 type batteries. The power management of the camera seems to be quite poor. At random times below 20% charge, the camera actually simply shuts off without warning. Also, a battery also typically only lasts 35-45 minutes, which isn’t long at all. Even the battery door design is quite underwhelming! You just shake it and the battery falls down.

BMPCC 4K only provides user with MFT Mount. It would have been great if Black Magic could provide three mount options – E Mount, EF Mount and MFT Mount just like in BMCC.

Well its not much of a disappointment but these provisions by Black Magic still remain the same even as the codecs of the camera have improved. But don’t you worry guys, Black Magic has speculated that they will duly release a firmware update which shall provide 15 stops of Dynamic Range.

The Pocket Cinema Camera 4K‘s biggest flaw, however, is its inability to actually capture the top resolution and frame rate of DCI 4K at 60fps in CinemaDNG RAW, which Blackmagic Design touts at the top of the camera’s spec sheet. There is no media that can internally record with that data rate. Despite this, you can still select the record mode — sadly it wont just work. To get a higher quality, you need to record on an external drive.

Nonetheless, the reviews from the FILMMAKING Community has been pretty positive for the BMPCC 4K.

Similarly, DOPs Pedro Luque and Daniel Junge shot the action scenes of movies “Don’t Breathe” and “Being Evel” using the BM PCC 4K cameras. With their first hand positive experiences, one can say that Black Magic can roll in our Bollywood too.

This trial should get you all excited and brainwashed (Cheeky way to make you read more technical blogs :P) for our more segments.

Accord Equips : Over and Out.

Accord Equips is Video production solution providing company in Mumbai, India. We specialise in Video Production ; Equipment Rentals ; Live Streaming ; 360 VR Production. We have offices in Mumbai & Pune This blog is managed inhouse with the help of experts, who encounter practical challenges everyday on shoots.