You are here:
Accord Equips 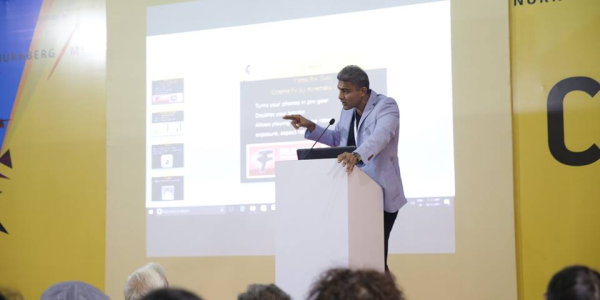 ü  Growth of 15% over last edition

The 27th edition of the annual B2B Broadcast India Show concluded on a spectacular note on 14th October 2017 at Hall 6, Bombay Exhibition Centre, Goregaon, Mumbai. The three-day trade fair witnessed the leading participants from across the globe present a wide array of products and technologies from the broadcast, television, film, audio and radio industry. For over the last two and a half decades, the Broadcast India Show has positioned itself as the single most interactive platform that showcases, the paradigm shifts in infotainment technology across the globe and allows technology seekers to connect with the innovators and experience the marvels first-hand.

Commenting on the occasion, Sonia Prashar, Chairperson & Managing Director, NürnbergMesse India said, “The response to the 27th edition of the Broadcast India Show has been phenomenal. Organized by NürnbergMesse India, over 590 manufacturers and brands displayed cutting edge technology and solutions at the trade fair. This year the event grew by 15% over last year in terms of exhibition space and new exhibitors. Broadcast India Show has carved a niche for itself in the broadcast industry. The exceptional response is testimonial to the fact that the event is the leading and the only platform for business networking and engagement for the industry. “

Kavita Meer, Project Consultant, Broadcast India Show 2017 shared, “Broadcast India Show has always attracted the key influencers and decision makers of the industry. This year over a leading number of global professionals made their attendance at the event. The show has become a calendar event for the industry and it is because of its ability to attract professionals from the entire spectrum of the broadcast industry that it enjoys such a strong connection with the infotainment industry.”

From content creation to its management and delivery, Broadcast India Show 2017 presented an entire gamut of products and solutions catering to the entire scale of the broadcast and film industry. Thousands of buyers and delegates gathered to witness the largest conglomeration of the solution providers for the broadcast and the infotainment industry. Apart from the business dealings on the exhibition show floor, there was a lot of buzz around the power-packed conference sessions throughout day 1 and 2 of the exhibition. Relevant topics like – Emerging trends in mobile and film making, IP in Broadcasting and Audio Solutions for TV Broadcasting were discussed. The keynote by Jonathan Wales, CEO of WildfireSonic Magic, USA, stressed upon Next Generation Audio Mixing while Dane Gambrill, Watson Media & Cloud Video Business Unit Executive – Asia Pacific, IBM stressed upon – Becoming a living media partner for your consumers: A cognitive future for Media & Entertainment.

Dr. Edison Samraj, Managing Director – India, Nepal, Bhutan and Maldives, Adventist Media Centre, shared, “Broadcast India Show 2017 was an excellent presentation of various technologies available for media people. I think it was a good exercise to see how we can have many complex operations with precision and clarity. Every business and media house needs to empower themselves with latest technologies and I have come here to learn what areas can be developed in our media house to match with the growing trends and technological advancements.”

Milind Dinakmule, Cinematographer, said, “I have been visiting the Broadcast India Show right from its inception and have always found the event to provide all solutions for the entire broadcast industry in a platter. I would like to see the event to expand to other cities as well like Chennai, Hyderabad and Kolkata. “

Leading brands not only managed to connect with existing buyers but also acquire new buyers from across the country. Amitabh Kumar, Head- Marketing (Professional Category), Sony India, said, “We have had a number of key visitors who have visited us at our booth not only from Mumbai but from other cities as well. The Broadcast India Show is a key platform for us to launch our models in the broadcast industry in India. This is the only platform where we can showcase our models to the broadcast industry. As India is growing, I hope Broadcast India Show also grows and accommodates more and more brands and vendors and makes it more attractive.”

Umender Shah, Business Head India and SAARC, Zeiss, shared, “We have been at the Broadcast India Show for the last 5 years and every year we have been seeing there is a considerable amount of change than the previous edition. Broadcast India Show is one of the serious professional show and the kind of visitors that come in, they are really good.  It is a platform where we meet the customers because of which we are successful. Every year the quality of visitors is also improving. I thank the organisers for organizing the event in such a beautiful way that every year, we not only get good customers but also new visitors from the show. Keep it up and thank you for such a beautiful management of the Broadcast India Show.”

Commenting on the occasion, Dan Holland, Marketing Manager, IHSE, USA, says, “We have had a very good experience at the Broadcast India Show. We have got quite a few new customers coming in. This is our third year at the Broadcast India Show and as we are getting more exposure and brand recognition, people are recognizing the quality that IHSE brings to the broadcast market for India. The quality of visitors was very good. We are seeing a wide range of visitors coming in anywhere from a standard small studio all the way up to full scale television and broadcast production.”

The next edition of the Broadcast India Show will be held from 25-27 October, 2018 and will once again serve as the trend setter and will prove to be testimony to the largest gathering of professionals from the broadcast Industry.

About the NürnbergMesse Group

NürnbergMesse is one of the 15 largest exhibition companies in the world.
The portfolio covers some 120 national and international exhibitions and congresses and approx. 40 sponsored pavilions at the Nuremberg location and worldwide. Every year, around 30,000 exhibitors (international share: 41%) and up to 1.4 million visitors (international share of trade visitors: 24%) participate in the own, partner and guest events of the NürnbergMesse Group, which is present with subsidiaries in China, North America, Brazil, Italy and India. The group also has a network of about 50 representatives operating in over 100 countries.

Understand Bird Biology to get better images
May 23, 2022
Lens Aperture simplified by Accord Equips
May 21, 2022